LIVE this Saturday March 10th at Iguanas at 8:30pm 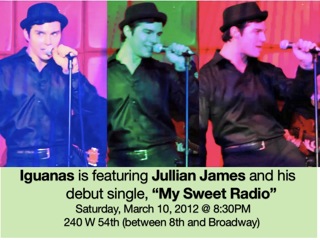 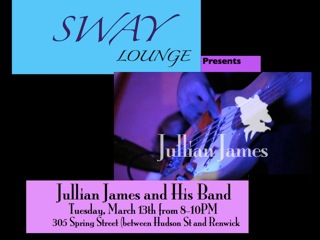 Excited to announce two upcoming shows!! March 10 at Iguanas and March 13 at Sway… would love to see everyone there to share an evening of fun, energy, emotion and music! anticipation~

I always felt great artists could invoke feelings in people. Feelings they did not know they did not know. Feelings people had missed in themselves, maybe feelings they pain to feel again, even feelings to inspire new life. Great artists inspire this all through fearless sounds, and words with the last of their mind payed to how ugly it may be, or how close to the bone the pain of these uncoverings may make themselves, and the listener feel. February 8th 2011 I walked into the production studio with a vision. My inspiration was the world, and all that the world entails I wrapped this hefty inspiration around my life story. I took smells, sounds, movements, desires, pains, lessons, colors, music, places, things, people, cultures, time periods, and created a platform of likings for myself somewhere I could sit comfortably, and compose beautiful music. January 24th 2012 I walked out with my vision physically in my hand. In the most literal way I could possibly put it, I held my life in my hands as I walked Hell’s Kitchen uptown making my way home to take a listen. There are many words, and many ways to express a feeling, but when a man is blessed with a physically obtainable vision of all he’s dreamed, anything that could be said out loud would be an understatement to the way his spirit feels inside. Swiftly within the past year my faith has grown strong, my belief in man has grown strong, and my love for this world has grown great. What more could an artist ask for than a platform of unlimited inspiration, and beauty? I say nothing!

Debut Record: “From My Integrated Soul”

The Night Before The Final Mastering

Just about a year ago I made New York City my new home. I moved with no real direction other than a feeling in my gut and a few songs in my back pocket written at some of the most painful stages of my life. I didn’t hope for anything, I wasn’t ready, I didn’t pray too much, and I wasn’t sure I deserved answers, but destiny led me here. That guttural gnawing in my stomach was soon to be answered. I started straight ahead at work on my record and in doing so I found the soul in my sound. I learned of the little trinkets in my tone and the beauty hiding behind the belts of my diaphragm. The gnawing in my belly all these years was just myself needing to be set free. I thought, if I don’t hash through this close-to-the-bone agony to do what I was gifted to do then this will be the end of me. I knew I wouldn’t have the energy left to pick myself up again. Tomorrow I have an appointment to finalize my record. I will go into the mastering session and I will hear so many beautiful sounds blossom like a beautiful rose filled with new life. I will hear my sweat, blood, and tears. My life stories will take off into the sky like a dragonfly. Most of all, I will be doing this knowing that I fought, I believed, I prayed, and so, I finished. This year has been filled with so much soul and so much guts and glory, that it is indescribable how my heart feels so warm and humble. I am jumping into my jacket and snow boots now to head into the studio, one last time. I will be finishing vocals on my song “Dragonfly”, the last song to be completed. What a perfect way to wrap this record and to start my new life, high in the sky where I have always dreamed of being, and so far far from my silhouette of pain. I will check back in tomorrow evening after the mastering of “From My Integrated Soul”. I hope I will be able to rest tonight!

I feel so many things~

The eve of this new year brings me great joy and excitement! I couldn’t have asked for a more fulfilling 2011. For this new year, my new years resolution… Is to just keep pushin’ forward and to stay on my steady path to great unconditional love, relationships, and success in my art! I feel beautiful things for myself, my loved ones, and the world. I feel 2011 has helped us shift, has helped lights shine, has cleared roads, made paths, has broken some of us down so intensely that our uphill climb may now begin. 2011 has enabled us to be a little less fearful of taking chances and moving outside the box. It has set us up strong! I believe we should all take strong consideration into what we pray for this year. What boils our blood or thins our tears? All of our yearning desires must be put into account because, for some reason, this year just feels so right, so plenty, so huge in such a lovely way… This is not a year for time. This is the time for a year… Amen~

…And The Day Came

…And the day came when the boy in the over-sized hat grew into his own and was able to open up his gift and share it with the world! The release party has been set to January 31st at The Hudson Terrace, 621 West 46th Street, New York, NY 10036! My first single, “My Sweet Radio,” an acoustic version entitled ”My Radio (The Mississippi Blend),” and one of my feel-so-good tracks, “Don’t Trip, And Fall,” will all be released! It’s been an incredible journey with overwhelming adventures stamped into my memory for the rest of my life. I can only imagine what is to come! If I have learned even just one thing on this path into my own, it is that a second chance is always possible and that with hard work, sweat, and maybe a few buckets of tears, so is happiness! There are so many special people involved in this ever growing project entitled ”From My Integrated Soul” and I hope that they have gained and taken with them even a tinkling of the hope that I have. In essence it seemed so simple. I decided to live, focus, and remedy an itch I wouldn’t have been able to ignore any longer and that’s just making some great ol’ fashion feel good music!!! Thankful to family, friends, and my supporters. Your belief in this project has brought it to life~ Amen

In Between The Beat Of A City’s Tune

Lifted brow to the sky, mild mood, hands held high. “Just give me a beat!” the old fashioned man said. Dressed from head to toe in everything but shirt to shoe cohesion, miss-matching with a bright pink top. Hat to boot, the man couldn’t be more content. All he wanted to do was sing, turning noise into music at every turn, his spirit was as energized as a young boy on Christmas morning awaiting the new family pet to show face from under the tree! This blind man made his way to what we call the city of dreams. To him it was music, the city of noise! At every corner, a new instrument, from the gallop of a horses hoof, to a dogs bark, to a taxi horn, all just enough to inspire a tune! A man most would call homely and unfortunate, on the contrary, he would say, “just consider me the lucky one. I have a gift. I hear sounds most never hear.” When asked to explain, he would reply, “have you been to the park in the village where the pigeons meet? It’s like an arrangement of bells and whistles, an ensemble of feathers, a living breathing orchestra! Or maybe under the streets where millions of feet scurry, shoes are clacking, people huffing to achieve their destinations while trains come to screaming halts. I hear subway vocalists resembling a chorus of sorts to these scurrying entities. Just give me a beat. Sight means no more to me than the excitement of your new sparkling shoe. My ears are my gratitude. The world is my symphony. I need not see what I hear so clearly…” You will find this miss-matched man dancing in the streets, a slanted grin to the left side of his face aimlessly scouring the city for the next big hit! A grateful man, we should say, a free spirit, an angel. How sweet to meet people that dance to different beats, that live and breathe in between the notes of life. How fortunate we are to experience these off-the-beat souls… Refreshing, I’d say. Grateful. I welcome you.

Poet, writer, diarist, author, teacher, theorist of creativity, and in my opinion, I would simply call her an “understander” of “the real things”. Anais Nin is one to inspire young writers searching for something real, gutsy, bold, brilliant, fearless, and maybe a tad of “girl power” :)! I first came across this lambent woman’s work through recording artist Alicia Keys’ record, “Element Of Freedom”. The introduction of the album starts with a spoken word segment stating, “and the day came when the risk it took to remain tightly closed in a bud was more painful than the risk it took to bloom, this is The Element Of Freedom.” I had carried this close to my heart. I thought of this regularly. It truly made a huge impact. I pondered regularly with these words in mind, not yet knowing the original words came from Anais herself. It wasn’t until I shared these words through my Facebook page that a woman brought to my attention that these were the words of Anais Nin, an author of avant-garde French style novels. The original quote being “and the day came when the risk to remain tight in a bud was more painful than the risk it took to blossom.” This new found information was very exciting for me, mostly because I had walked with these words for so long and now I felt I had been let in her closet full of endless pieces of literature to take in and enjoy! Her words are strong, aged, wise, fearless, soulful, and with a certain push to the lyric that she did with such ease. I say AMEN to Anais. I do believe women are mighty and you were a solider of all sorts, inspiring, fierce to the core, and a true legend.

Enjoy Anais Nin. We are blessed to endure a great mind, heart, and soul as hers~ 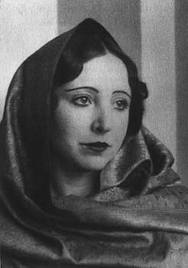 Please take a minute, and enjoy,
The Singing Dragon 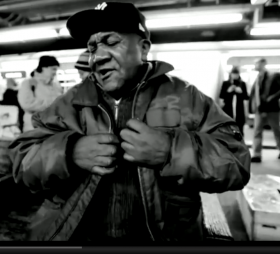 The Bliss Of A Beautiful Journey

Been hard at work for the past few months with everyone working so diligently to make this beautiful project grow! The album is in its last stages of production. The music video for my first single “My Sweet Radio” is completed and ready to rock! We have auditioned the most amazing musicians and have been rehearsing weekly. My producer, Nathanael Nicol, and I have also brought some of the pieces right back to where they started from, on piano, and oh, how beautiful they sound in that sweet spot of soul! Soon it will be a year since we have been brewing this master piece from the ground into a sky of dragonflies! My debut album, “From My Integrated Soul”, along with my very own record label, Jullian Records, has come to life for everyone to enjoy. Hard work is humbling. It is raw. It tends to leave you feeling bare and dazed at times, but oh, how sweet the memories, the magic, and the bond of a true team of souldiers. I will fight for what I believe and my music will be my transport to make that happen! Love, Jullian.